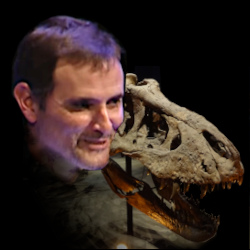 Project VERTIGO – Deciphering early stages of VERTebrate evolution: insights from long IGnored Belgian Devonian fossil Organisms.
In the scope of the BRAIN-be 2.0 program of the Belgian Science Policy Office (Belspo), the Royal Belgian Institute of Natural Sciences (Operational Directorate Earth and History of Life) aims to develop a new research avenue in the field of early chordate/vertebrate evolution.
The evolutionary history of vertebrates began, at the latest, during the early Cambrian (c. 520 Myr) with the first occurrence of elongated and laterally flattened soft-bodied organisms known as chordates, possessing a notochord (the forerunner of the vertebral column) but devoid of backbone and jaw. Vertebrates subsequently underwent major anatomical changes, such as the acquisition of a vertebral column, development of a skull, formation of jaws, and adaptations to terrestrial life.
Early chordate and early vertebrate fossils provide our only direct information on the origin of vertebrates and on how their distinctive body plan evolved. Unfortunately, the fossil record of early chordates and part of the early vertebrates is extremely scarce as these organisms mostly consist of decay-prone soft parts (e.g. integument and muscles) that are usually degraded and lost prior to fossilisation, making the interpretation of their anatomy highly challenging.
Although early stages of vertebrate evolution are regularly clarified by new finds of fossils, serious gaps remain in our understanding. To overcome these issues, the VERTIGO project focuses on the study of new findings of putative early chordates and early vertebrates from the Lower Devonian of Belgium.
Institution
The Royal Belgian Institute of Natural Sciences (RBINS, http://www.rbins.be) is one of the ten federal scientific institutions that are governed by Belspo. The institute aims to provide the scientific world, public authorities and civil society with good and relevant science, appropriate advice, opening up avenues of discovery in nature, its long history and its sustainable management. One in three people employed at the RBINS is a scientist. The scientific staff includes mainly biologists, palaeontologists and geologists, but also oceanographers, anthropologists, prehistorians and archaeologists, as well as geographers, physicists, bioengineers and mathematicians, which facilitates multidisciplinary research. With 37 million specimens conserved as Belgian heritage of global significance, the RBINS collections are the third largest in Europe, just after London and Paris, and are among the largest in the world.

TASKS
- The recruited researcher will work in strong collaboration with paleontologists of the project. His/her role will be to understand the taphonomical and geological history of the site having yielded the fossils. Also, the recruited researcher will be interested in soft-tissue preservation of early chordate/vertebrate.
- The researcher will also have to take charge of field campaign organisation in Belgium and will actively participate in the management of the collected material in the paleontology collections of the RBINS. He/she will also participate in the communication and dissemination of knowledge and research results to the scientific and student communities, and the civil society.

DIPLOMA
- You have a Doctor of Science degree in a domain that matches the vacancy, which was obtained maximally seven years before the end date of the period within which you can apply for this vacancy. This maximum period of seven years for possession of a doctorate is extended by one year for every absence due to pregnancy, parental or adoption leave, as well as any long-term absence due to illness of the candidate or/and long-term absence due to illness of a family member of the first degree.
- You have at least three years of postdoctoral experience in the fields of palaeontology and/or geology, with a strong experience in taphonomy.
- Your research qualities are in line with the policies of the RBINS research strategy.

TECHNICAL COMPETENCE
- You have already done research in an international framework.
- You have an in-depth knowledge and use of techniques for taphonomical studies (RAMAN, micro X-ray fluorescence, etc.)

GENERIC COMPETENCE
- You have (potential) leadership qualities.
- You are quality-oriented, honest, creative and cooperation-oriented.

The position consists of a 13-month contract:
Assistant (scientific staff, grade SW11) at the Royal Belgian Institute of Natural Sciences.
The start of the contract is scheduled for March 1st, 2022

Apprentissage a la preparation and co