Remains of titanosaurian sauropods are common in the Upper Cretaceous (Maastrichtian) of the Haţeg Basin, Romania, but their usual occurrence as either isolated elements or dispersed bones in multitaxon bonebeds has hampered the understanding of their detailed anatomy or systematic position. The discovery of a partial articulated skeleton in floodplain deposits at Nǎlaţ-Vad, preserving parts of the vertebral column and pelvic girdle, allows for the first time a more detailed understanding of the axial anatomy of the Romanian titanosaurs. The specimen is described as a new taxon, Paludititan nalatzensis gen. et sp. nov., based on several autapomorphies: presence of an accessory anterior centrodiapophyseal lamina in the posterior dorsals; dorsal segments of the anterior and posterior centrodiapophyseal laminae parallel in posterior dorsals; presence of amphiplatyan mid-caudal vertebrae within the procoelous series; anterior caudal vertebrae with narrow neural spines showing anteriorly projecting anterodorsal corner, and presence of a posterolateral buttress on the iliac peduncle of the ischium. The description of Paludititan supports a higher titanosaurian diversity in the Haţeg assemblage than previously recognized, and will contribute to the clarification of the taxonomic status of Magyarosaurus, the only titanosaur previously described from the area, and its included species. Phylogenetic analyses of Paludititan show it is a relatively derived titanosaur, but yields equivocal results as to its more precise systematic position and relationships, depending on the dataset used. These preliminary results suggest that development of a standard dataset for cladistic analyses should represent one of the major tasks of sauropod systematics.

McDonald, A.T., Barrett, P.M., and Chapman, S.D. 2010. A new basal iguanodont (Dinosauria: Ornithischia) from the Wealden (Lower Cretaceous) of England. Zootaxa 2569:1-43.
ABSTRACT: A nearly complete right dentary originally noted by Mantell in 1848 is redescribed. The specimen, NHMUK 28660, was discovered in a quarry near Cuckfield, West Sussex, from the same formation as the original teeth of Iguanodon anglicus. Fresh examination reveals that NHMUK 28660 exhibits a single autapomorphy (a row of foramina extending from the ventral surface of the symphysis onto the lateral surface of the dentary) and a unique combination of characters that distinguish it from all other iguanodontian dentaries. In light of this and because I. anglicus is regarded as a nomen dubium to which additional material cannot be unambiguously referred, NHMUK 28660 is made the holotype of the new genus and species Kukufeldia tilgatensis.

Hübner, T.R., and Rauhut, O.W.M. 2010. A juvenile skull of Dysalotosaurus lettowvorbecki (Ornithischia: Iguanodontia), and implications for cranial ontogeny, phylogeny, and taxonomy in ornithopod dinosaurs. Zoological Journal of the Linnean Society. doi: 10.1111/j.1096-3642.2010.00620.x.
ABSTRACT: A juvenile skull of Dysalotosaurus lettowvorbecki, a basal iguanodontian from the Middle Dinosaur Member (Kimmeridgian) of the Tendaguru Beds (Tanzania), is described and reconstructed in detail. Further preparation and computed tomography scans have uncovered additional and formerly unknown skull elements, especially of the lower jaw. The reconstruction of the skull reveals ontogenetic differences to earlier reconstructions, which were based on specimens of relatively older individuals. The most notable ontogenetic changes in Dysalotosaurus are a relative lengthening of the muzzle, a decrease in the relative size of the orbit, and a straightening of the posterior skull roof. Additionally, ontogenetic variations were found in many single elements of the skull, all of which reflect the three main tendencies described above. Furthermore, there might have been an ontogenetic change in the diet, from omnivorous juveniles to fully herbivorous adults. The results of this study will help to evaluate ontogenetic stages in other ornithopods, and will shed light on a crucial stage of ornithopod evolution that culminated in the highly specialized and diverse hadrosaurs of the Cretaceous. Many of the evolutionary changes seen in this lineage can be attributed to peramorphism, and probably reflect a perfection of the adaptation towards an obligatory herbivorous diet.

Carcharodontosaurs were the largest predatory dinosaurs, and their
early evolutionary history seems to be more intricate than was
previously thought. Until recently, carcharodontosaurs were restricted
to a group of large theropods inhabiting the Late Cretaceous Gondwanan
land masses, but in the last few years Laurasian evidence has been
causing a reevaluation of their initial diversification. Here we
describe an almost complete and exquisitely preserved skeleton of a
medium-sized (roughly six metres long) theropod from the Lower
Cretaceous series (Barremian stage) Konservat-Lagerstätte of Las Hoyas
in Cuenca, Spain. Cladistic analysis supports the idea that the new
taxon *Concavenator corcovatus* is a primitive member of
Carcharodontosauria, exhibiting two unusual features: elongation of
the neurapophyses of two presacral vertebrae forming a pointed,
hump-like structure and a series of small bumps on the ulna. We think
that these bumps are homologous to quill knobs present on some modern
birds; the knobs are related to the insertion area of follicular
ligaments that anchor the roots of the flight feathers (remiges) to
the arm. We propose that *Concavenator* has integumentary follicular
structures inserted on the ulna, as in modern birds. Because scales do
not have follicles, we consider the structures anchored to the
*Concavenator* arms to be non-scale skin appendages homologous to the
feathers of modern birds. If this is true, then the phylogenetic
bracket for the presence of non-scale skin structures homologous to
feathers in theropod dinosaurs would be extended to the Neotetanurae,
enlarging the scope for explaining the origin of feathers in
theropods. 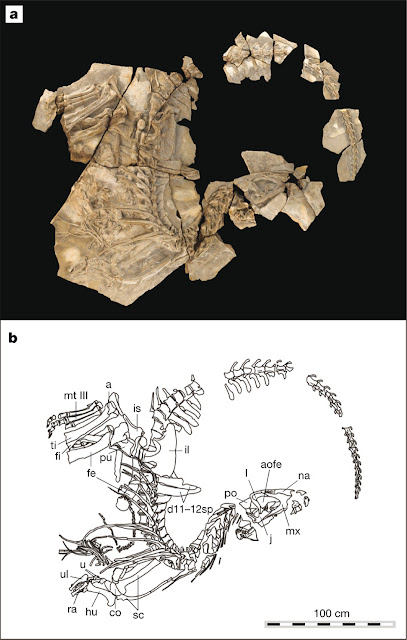