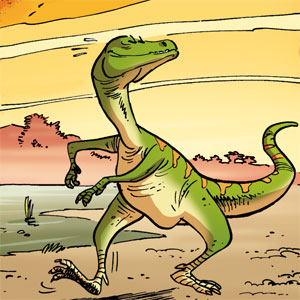 S. H. Burch and M. T. Carrano (2012). An articulated pectoral girdle and forelimb of the abelisaurid theropod Majungasaurus crenatissimus from the Late Cretaceous of Madagascar. Journal of Vertebrate Paleontology 32(1): 1-16.

Résumé: Abelisaurid theropods are common members of Cretaceous Gondwanan faunas and are characterized by a bizarre, highly reduced forelimb. Unfortunately, forelimb elements are rarely preserved and thus the basic structure of the abelisaurid forelimb remains poorly understood. Until recently, the Upper Cretaceous Maevarano Formation of northwestern Madagascar has produced numerous exceptional specimens of the abelisaurid theropod Majungasaurus crenatissimus but comparatively little forelimb material. A recently discovered articulated skeleton of Majungasaurus preserves a virtually complete pectoral girdle and forelimb, which, along with additional isolated forelimb elements, affords important new insights into the structure of these elements. New specimens of the scapulocoracoid and humerus allow more detailed description of their morphology, and antebrachial and manual elements are described for the first time. The radius and ulna are approximately one-quarter the length of the humerus and both have expanded proximal and distal articular surfaces relative to their narrow diaphyses. The manus consists of four digits, each composed of a short metacarpal and one (digits I and IV) or two (digits II and III) phalanges. No ossified carpals are present. The proportions of the brachium and antebrachium are stout, more similar to the condition in Carnotaurus than in Aucasaurus. We reinterpret manual digit identities in Aucasaurus and Carnotaurus based on new information provided by the manus of Majungasaurus. Overall, the morphology of the forelimb in Majungasaurus reveals that abelisaurids share an extremely reduced, unique morphology that is dissimilar to the more typical theropod condition seen in other ceratosaurs.

Ezcurra, M.D., & F.L. Agnollin. 2012. An abelisauroid dinosaur from the Middle Jurassic of Laurasia and its implications on theropod palaeobiogeography and evolution. Proceedings of the Geologists' Association