Résumé: Here we describe a second nyctosaurid pterosaur from the Late Cretaceous laminated limestone deposits of northeast Mexico. The specimen was discovered in the Múzquiz quarry area in northern Coahuila and comprises an isolated right wing skeleton including the humerus, radius/ulna, carpus, wing finger metacarpus and the proximal segment of wing finger phalanx I. The specimen is likely to be a primarily isolated wing, at least the basal wing finger phalanx of which was complete prior to collection. The specimen is referred to cf. Muzquizopteryx sp. on account of its humerus morphology, which is coincident with that of Muzquizopteryx coahuilensis, although a lack of diagnostic characters at the species level prevents any further identifcation. Its discovery from the Late Turonian deposits of northern Coahuila near Muzquíz, confrms it as the oldest nyctosaurid discovered to date.

Résumé: A Jurassic salamander, Beiyanerpeton jianpingensis (gen. et sp. nov.), from a recently found site in western Liaoning Province, China is the earliest known record of Salamandroidea. As a Late Jurassic record of the group, it extends the range of the clade by ~40 Ma. The Late Jurassic taxon is neotenic and represented by exceptionally preserved specimens, including fully articulated cranial and postcranial skeletons and bony gill structures close to the cheek region. The fossil beds, consisting of dark-brown volcanic ash shales of the Upper Jurassic Tiaojishan (Lanqi) Formation (Oxfordian), underlie trachyandesite rocks that have yielded a SHRIMP zircon U-Pb date of 157 ± 3 Ma. The fossiliferous beds are substantially older than the Jehol Group, including the Yixian Formation (40Ar/39Ar dates of 122–129 Ma), but slightly younger than the Middle Jurassic Daohugou horizon (40Ar/39Ar date of 164 ± 4 Ma). The early fossil taxon shares with extant salamandroids derived character states, including: separated nasals lacking a midline contact, angular fused to the prearticular in the lower jaw, and double-headed ribs on the presacral vertebrae. In contrast to extant salamandroids, however, the salamander shows a discrete and tooth-bearing palatine, and unequivocally nonpedicellate and monocuspid marginal teeth in large and presumably mature individuals. The finding provides insights into the evolution of key characters of salamanders, and also provides direct evidence supporting the hypothesis that the split between Cryptobranchoidea and Salamandroidea had taken placed before the Late Jurassic Oxfordian time. In this aspect, both paleontological and molecular data now come to agree.

The Cretaceous–Paleogene mass extinction approximately 66 million years ago is conventionally thought to have been a turning point in mammalian evolution1, 2. Prior to that event and for the first two-thirds of their evolutionary history, mammals were mostly confined to roles as generalized, small-bodied, nocturnal insectivores3, presumably under selection pressures from dinosaurs4. Release from these pressures, by extinction of non-avian dinosaurs at the Cretaceous–Paleogene boundary, triggered ecological diversification of mammals1, 2. Although recent individual fossil discoveries have shown that some mammalian lineages diversified ecologically during the Mesozoic era5, comprehensive ecological analyses of mammalian groups crossing the Cretaceous–Paleogene boundary are lacking. Such analyses are needed because diversification analyses of living taxa6, 7 allow only indirect inferences of past ecosystems. Here we show that in arguably the most evolutionarily successful clade of Mesozoic mammals, the Multituberculata, an adaptive radiation began at least 20 million years before the extinction of non-avian dinosaurs and continued across the Cretaceous–Paleogene boundary. Disparity in dental complexity, which relates to the range of diets, rose sharply in step with generic richness and disparity in body size. Moreover, maximum dental complexity and body size demonstrate an adaptive shift towards increased herbivory. This dietary expansion tracked the ecological rise of angiosperms8 and suggests that the resources that were available to multituberculates were relatively unaffected by the Cretaceous–Paleogene mass extinction. Taken together, our results indicate that mammals were able to take advantage of new ecological opportunities in the Mesozoic and that at least some of these opportunities persisted through the Cretaceous–Paleogene mass extinction. Similar broad-scale ecomorphological inventories of other radiations may help to constrain the possible causes of mass extinctions9, 10.

The Late Jurassic Pterosaur Rhamphorhynchus, a Frequent Victim of the Ganoid Fish Aspidorhynchus?

Résumé: The skull of the Cretaceous pterosaur Istiodactylus latidens, a historically important species best known for its broad muzzle of interlocking, lancet-shaped teeth, is almost completely known from the broken remains of several individuals, but the length of its jaws remains elusive. Estimates of I. latidens jaw length have been exclusively based on the incomplete skull of NHMUK R3877 and, perhaps erroneously, reconstructed by assuming continuation of its broken skull pieces as preserved in situ. Here, an overlooked jaw fragment of NHMUK R3877 is redescribed and used to revise the skull reconstruction of I. latidens. The new reconstruction suggests a much shorter skull than previously supposed, along with a relatively tall orbital region and proportionally slender maxilla, a feature documented in the early 20th century but ignored by all skull reconstructions of this species. These features indicate that the skull of I. latidens is particularly distinctive amongst istiodactylids and suggests greater disparity between I. latidens and I. sinensis than previously appreciated. A cladistic analysis of istiodactylid pterosaurs incorporating new predicted I. latidens skull metrics suggests Istiodactylidae is constrained to five species (Liaoxipterus brachyognathus, Lonchengpterus zhoai, Nurhachius ignaciobritoi, Istiodactylus latidens and Istiodactylus sinensis) defined by their distinctive dentition, but excludes the putative istiodactylids Haopterus gracilis and Hongshanopterus lacustris. Istiodactylus latidens, I. sinensis and Li. brachyognathus form an unresolved clade of derived istiodactylids, and the similarity of comparable remains of I. sinensis and Li. brachyognathus suggest further work into their taxonomy and classification is required. The new skull model of I. latidens agrees with the scavenging habits proposed for these pterosaurs, with much of their cranial anatomy converging on that of habitually scavenging birds. 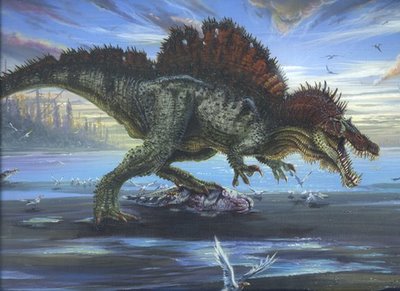