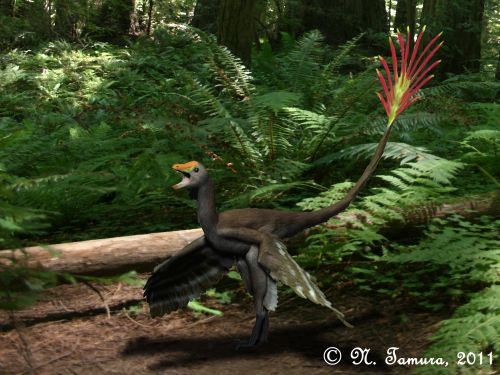 Résumé: Two new specimens of the oviraptorid theropod Nemegtomaia barsboldi from the Nemegt Basin of southern Mongolia are described. Specimen MPC-D 107/15 was collected from the upper beds of the Baruungoyot Formation (Campanian-Maastrichtian), and is a nest of eggs with the skeleton of the assumed parent of Nemegtomaia on top in brooding position. Much of the skeleton was damaged by colonies of dermestid coleopterans prior to its complete burial. However, diagnostic characters are recovered from the parts preserved, including the skull, partial forelimbs (including the left hand), legs, and distal portions of both feet. Nemegtomaia represents the fourth known genus of oviraptorid for which individuals have been found on nests of eggs. The second new specimen, MPC-D 107/16, was collected a few kilometers to the east in basal deposits of the Nemegt Formation, and includes both hands and femora of a smaller Nemegtomaia individual. The two formations and their diverse fossil assemblages have been considered to represent sequential time periods and different environments, but data presented here indicate partial overlap across the Baruungoyot-Nemegt transition. All other known oviraptorids from Mongolia and China are known exclusively from xeric or semi-arid environments. However, this study documents that Nemegtomaia is found in both arid/aeolian (Baruungoyot Formation) and more humid/fluvial (Nemegt Formation) facies.

Résumé: Twenty-two endocasts of 12 specimens of Amurosaurus riabinini Bolotsky et Kurzanov (Lambeosaurinae, Hadrosauridae) have been examined. The most important neurobiological features of this species and duck-billed dinosaurs integrally are discussed. It has been established that the sense of smell played the major role in afferentation of hadrosaurids. In lambeosaurines, the vomeronasal sense of smell was probably intensified to search for sexual partners at a large distance. The hypotheses of sound and visual communications of duck-billed dinosaurs are not corroborated.

Buffetaut E. (2012). An early spinosaurid dinosaur from the Late Jurassic of Tendaguru (Tanzania) and the evolution of the spinosaurid dentition. Oryctos 10: 1-8


Abstract - An isolated theropod tooth from the terminal Jurassic of the Tendaguru (Tanzania), originally referred to Labrosaurus (?) stechowi, is described as the type specimen of a new genus and species of spinosaurid theropod. It shows an enamel ornamentation reminiscent of Baryonyx and allied forms, but differs from all other known spinosaurids by the large size of the denticles borne by the carinae. The new taxon is the earliest currently known spinosaurid. It sheds some light on aspects of dental evolution in spinosaurids, which seems to have been characterised by reduction of the denticles.

Résumé: The osteology of the holotype and referred specimens of the saurolophine hadrosaurid, Gryposaurus latidens, from the lower Two Medicine Formation of Montana (USA), is described in detail. With an estimated early Campanian (Late Cretaceous) age, this dinosaur is one of the oldest known hadrosaurids. Gryposaurus latidens shows several autapomorphies, including dentary tooth crowns, with an apicobasal length/mesiodistal width ratio of 1.7–2.2, a single median carina, and large marginal denticles in sections of the dental battery; deep and oval depression on the posteroventral premaxillary surface; and, in the context of Hadrosauridae, a shallow lacrimal process of the rostral process of the jugal. Furthermore, G. latidens differs from G. notabilis and G. monumentensis in having a broadly arcuate anterolateral oral margin of the premaxilla, a posterior margin of the narial fenestra that is wider than the dorsoventral depth of the proximal region of the narial bar, with a nasal crest that rises above the level of the frontals (in adults) and is located above the posterior margin of the narial fenestra, and wide and shallow posteroventral margin of the rostral process of the jugal, among other characters. This study confirmed a previous hypothesis supporting G. latidens as the sister taxon to a clade composed of the other species of Gryposaurus.

Résumé: Many of the earliest discovered ornithurine birds from the Jehol Group in northeastern China are highly fragmentary; this current study on the only known specimen of Liaoningornis longidigitrus, first described by Hou in 1997, indicates that the taxon is in fact a member of the Enantiornithes. Although based on fragmentary and poorly preserved material, the absence of a well-developed sternum, lack of developed cnemial crests on the tibiotarsi and reduced pedal unguals suggests Liaoningornis should be excluded from the more advanced ornithothoracine clade. The taxon remains distinct from all known enantiornithes, although it shows similarity to the Spanish taxon Eoalulavis hoyasi; shared features of the sternum suggest a close relationship between these two, although disparity from other enantiornithies suggests this may be an artifact of ontogeny. The only Liaoningornis specimen is too fragmentary to be able to make strong inferences about its placement within the diverse enantiornithine clade.

Résumé: We report a new species of basal ornithurine bird, Schizooura lii gen. et sp. nov., based on a well-preserved specimen from the Lower Cretaceous Jiufotang Formation in Jianchang, western Liaoning, China. Phylogenetic analysis indicates that it is more derived than Jianchangornis and Archaeopteryx, but more basal than all other known Jehol ornithurines. The new specimen preserves a unique suite of characters that differentiate it from other known taxa, including several features previously unreported in Early Cretaceous ornithurines, including a V-shaped furcula with a short hypocleidium, a rostrocaudally elongate unperforated sternum with deep caudal notches absent, and a deltopectoral crest that extends for half the length of the humerus. The specimen preserves a nearly perfectly articulated ksull that indicates the species was beaked and preserves details of the skull anatomy such as the premaxilla-frontal articulation. The most notable feature of this specimen is the preservation of a feathered tail morphology previously unknown among Mesozoic birds. It is the second tail morphology known among early ornithurines, which have until now only preserved fan-haped tails. The new specimen preserves a forked tail compose of elongate rectrices medially separated by a deep notch. This tail feather morphology in modern birds decreases aerodynamic efficiency relative to the fan-shaped tail, but increases chance of sexual reproduction. This discovery suggests that this tradeoff convergently evolved in basal members of Ornithurae, and is consistent with the wooded environment ment inferred for the Jehol.

Résumé: Recent discoveries of more than ten new species of tyrannosauroid theropods are helping to understand the origin and evolution of colossal body size and other characteristic features of Tyrannosaurus rex and its terminal Cretaceous relatives. Particularly important has been the discovery and reinterpretation of Late Jurassic tyrannosauroids from Europe and North America, which are intermediate in size and phylogenetic position between small basal tyrannosauroids and the largest Late Cretaceous species. The fragmentary nature of these Jurassic specimens, however, has frustrated attempts to understand their systematics and phylogeny. A new specimen from the Late Jurassic of England was recently named as a new species (S.langhami) of the genus Stokesosaurus, which is known from several fragmentary fossils from North America. We review the systematics and
phylogeny of these European and North American specimens and show that there are no unequivocal synapomorphies uniting them. Furthermore, a revised phylogenetic analysis does not recover them as sister taxa. This necessitates a taxonomic revision of this material, and we name a new genus (Juratyrant) for the British specimen. 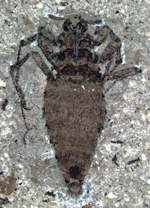